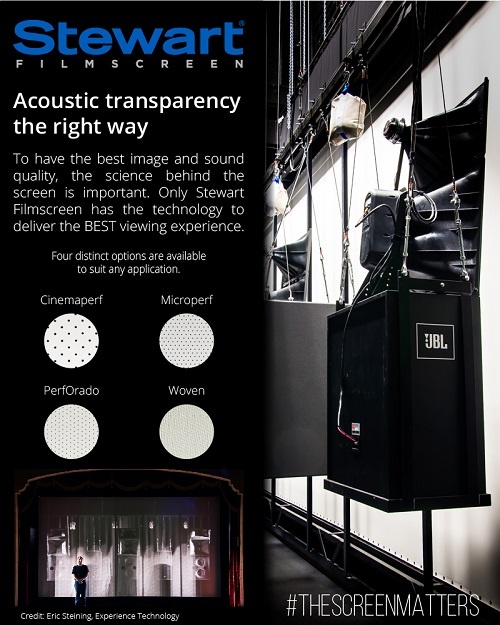 One of the issues that can plague a variety of projection systems installations is the location of the speakers. In a smaller room, having large speakers present and taking up wall or floor space can limit the size of the screen. In an even larger room, with ample space to place speakers (and have the screen size you are seeking), the positional audio can be compromised by speaker location, or the user may prefer the appearance of concealed speakers. The remedy is to use in- or on-ceiling speakers, but as many audio enthusiasts will tell you, they won’t provide quite the right experience if you are looking for a precise soundstage that matches the image on screen. What does this leave us? Place the speakers behind the screen! While this may seem unlikely, as screens are solid surfaces, it is indeed possible. Enter acoustically transparent (AT) screens.

Acoustically transparent screens fall into one of two categories: woven or perforated. Both rely on the same principle to allow sound through; they have gaps in the screen material to allow the sound waves from a speaker to pass through the screen to be heard by the audience. However, each one accomplishes this differently. Woven screens employ a “coarse” weave, allowing the fibers to naturally provide a gap between them that provides the space needed for audio. Perforated screens, as the name implies, use punched perforations in the screen material to provide the required space for audio to pass through. The gaps must be large enough to allow audio through the screen surface, but small enough to prevent too much light from the projector reflecting from surfaces behind the screen. Sometimes a black mask is employed to improve this, but it can reduce the transmissivity of the screen.

AT screens must also consider viewing distance… human vision allows us to recognize minimally small objects at a given distance, so if the perforation or weave is small enough, it will blend into the screen surface to the viewer, making the gaps in the screen effectively invisible. Now, this is no problem for a commercial cinema screen, which despite its large size, is quite far away from even the closest audience member. When we turn to the conference room, media room, or theater, the viewers may be much closer to the screen, so selecting an acoustically transparent screen must be done very carefully. We also must deal with another unpleasant factor… moiré.

Moiré is a pattern of interference lines that appear on screen when the pixel map of the projector aligns geometrically with the fixed hole pattern or weave voids of the screen surface. This artifact can be very mild, or very distracting. Moiré can be managed before the installation through analysis of the pixel spacing on the screen and knowledge of the geometry and behavior of the perforated or woven surface. Thorough manufacturers establish databases of real world test information to get out ahead of the issue. With higher resolution projectors, the pixel map has become finer, and there has been a change in the occurrence or non-occurrence of moiré in application. Some projector technologies, SXRD and DILA exhibit very insignificant moiré interaction at 4K. With DLP the problem has moved away entirely from small screens and requires management at widths roughly twice what was noted or required previously.

One consequence of finer pixel pitches is that viewers are now functionally seated closer to surfaces than what was previously considered acceptable. For perforations and weaves, this has consequences. A skilled designer or consultant must track minimum seating distances acceptable for perforated and woven surfaces.

The weave from a woven AT screen can also introduce a slight “sparkle” where light hits raised parts of the weave and reflects unevenly back to the audience. Perforated screens, being made from a flat vinyl material will not have the uneven screen surface that is potentially present in a woven fabric but can suffer from anomalies if not perforated correctly. Poor quality perforations can pucker or deform the holes, causing similar visual anomalies or visible holes. Some in the trade jokingly reference the Hanging Chad texture on some screens, especially those that outsource their perforation to third-party providers (remember the vinyl automotive headliners of days gone by?).

All AT screens, regardless of technology type, will impact sound slightly. Each type will have a different effect, but the overall issue is one of attenuation of sound; reduction of sound volume in certain frequency ranges. This can be overcome by using an EQ but can require accurate data from the screen manufacturer or testing by the integrator to ensure proper audio quality.

Stewart Filmscreen has long been a leader in AT screen materials, beginning with the proven Cinemaperf for commercial cinema applications. Stewart invested significantly, studying and developing a perforation technique for smaller venues, which allows AT screens to provide optimal image quality and sound performance. Stewart’s Microperf X² THX Ultra technology provides a specialized diamond-shaped perforation pattern, oriented to eliminate moiré. There are over 30,000 precision perforations per square foot, each hole, a mere twenty-thousandths of an inch in diameter, which provides optimal balance, via minimal impact on sound and reasonable opacity and rejection and absorption of reflected light from behind… this eliminates the need to use a black backing close coupled to prevent contrast loss, a practice which can further interfere with accurate sound transparency.

Back in the day, Stewart provided an inline processor that automatically adjusted the audio frequencies to compensate for the attenuation a Microperf X² THX Ultra introduced to the sound system. Today’s digital room voicing functionality and processing power has made that step anachronistic.

The takeaway? Choose your screen wisely, no matter what the application.
To learn more about acoustically transparent screens or Stewart THX Microperf X² screens, Stewart Filmscreen has commissioned an extensive whitepaper on the topic from Brawn Consulting, including acoustical performance tests conducted in partnership with JBL labs.

Not sure what you need?